Encompassing 90 acres on Moose Island overlooking Broad Cove, this locale has a history of marine industry that continues today in varied forms, including marine aquaculture. A salmon farm can be viewed from Cony Beach, near the parking area. Beyond, tugboats and barges take advantage of Estes Head, the deepest natural port on the US East Coast. Shipments have included pulp and paper, cattle, even wind turbines. Several miles of trails cross the park and lead to a rocky bluff 173 feet above sea level that looks out over Cobscook Bay to Campobello Island and Lubec.

While wild Atlantic salmon in the Gulf of Maine are listed as an endangered species, Maine has been cultivating Atlantic salmon since the early 1990s. Young salmon raised in freshwater hatcheries in Bingham and Machias are placed in cages or net pens in Machias, Cobscook, and Passamaquoddy bays, and as far south as Black Island off Mount Desert, where they grow to at least ten pounds over two to three years before being harvested. Production peaked in 2000, but lately has increased after a period of decline as management practices improved. In 2011, Atlantic salmon was Maine’s second most valuable fishery, after lobster. The industry remains important to the region’s economy. 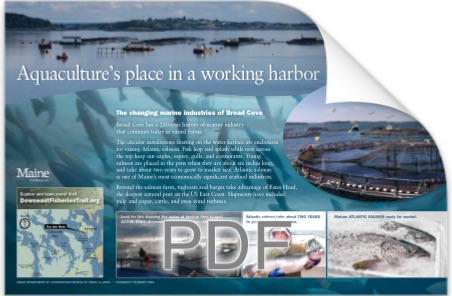 Hike the trails at the park