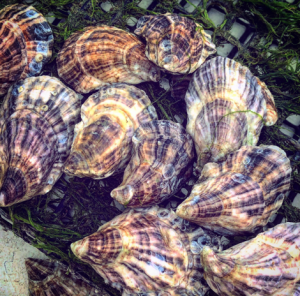 From a rare delicacy at a high-end restaurant to a treat from the local farmer’s market, farmed oysters in Maine are an up-and-coming product. The aquaculture industry is one of the fastest-growing food sectors and has the potential for continued expansion (FAO). According to the FAO, aquaculture “accounts for 50 percent of the worlds fish used for food.” Farmed oysters, clams, and mussels represent around two-thirds of the marine aquaculture in the United States (NOAA 2019). Not only has aquaculture provided international potential, but it has also been a major factor in the local food movement.

Oysters are bivalves, with a compressed body inside a hinged shell. They can range in size from three to fourteen inches and live in brackish or saltwater. The species most commonly found in Maine is the Eastern Oyster (Crassostrea virginica). Native to Maine, the Eastern Oyster can be found in Atlantic waters from Canada to Argentina. Oysters are filter feeders who strain suspended particles from the water. Their main food source is planktonic algae they filter out of the water column. These filtering qualities that oysters utilize are quite beneficial to overall water quality and ecosystem health.

The market in Maine for fresh, raw or fried oysters is steadily growing (National Geographic). As of 2017, there were approximately 80 oyster farms in the state of Maine (Schmitt). Data from the Maine Department of Marine Resources (DMR) also shows that over a twelve-year period, the numbers from the harvest of farm-raised American oysters have increased dramatically. For example, in 2005 two million pieces (individual oysters) were harvested, while in 2017 over ten million pieces were harvested, worth $8 million. (DMR). Statistics from the harvest data found on the maine.gov website demonstrate how crucial these products are to the state and the economy.

The majority of small scale aquaculture farms in Maine cater to their communities, selling directly from their company or selling locally to retail outlets and restaurants. A niche market has developed in Maine for oysters grown in different waterways throughout the state. Oysters grow more slowly in Maine than further south due to the lower water temperatures. Many consumers say this is actually a desirable attribute that allows Maine oysters to have better shell quality, a better shelf life, and according to some, a better-tasting oyster. Each company often names or brands their oysters by the waterway they were grown in.

In order to raise oysters in an aquaculture system, there are multiple steps. To begin, oyster seeds are usually received from one of the two commercial hatcheries in Maine during the months of June or July. A common way to grow oysters is in a suspended floating bag system containing stacked trays of mesh nets (Maine Aquaculture). Cages are frequently flipped or put through a tumbler so as to prevent any accumulation and growth of organisms such as algae and tunicates that may have entered, as well as organic matter such as algae and seaweed. This is an important step to prevent the netting from fouling as well as preserving the aesthetic 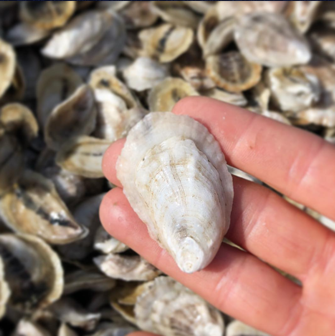 expectation of the oyster shell. In the winter, most oyster farmers sink their cages in order to protect them from the winter elements. Other producers may opt to use bags in the intertidal, or suspension culture involving floating bags, or bottom seeding. Each method differs in the labor involved in cleaning, and conditions of the oyster.

As for management and regulations, aquaculture practices are considered a private business and require permits and leases. In Maine, there are three types of leases. The Limited Purpose Aquaculture (LPA) license is the most common for farmers just starting out or for diversified incomes. They are allotted up to 400 square feet of space for one year, and individuals can have up to four of these leases. This can be renewed annually and costs $50 per year. Town and nearby landowners can comment on the business, but a public hearing is not necessary. The next level up is the Experimental Lease which has a $100 application fee and is good for three years. It allows for up to 4 acres and $100-per-acre rental fee. The third lease is quite different than the first two, meant for larger scale and longer-term operations. This is called the Standard Lease. This lease can be up to 100 acres for 20 years. The upfront costs are higher, requiring $1,500 for the application fee with an additional $100 per acre. A site review by the Department of Marine Resources is required along with a public hearing. This process can take from eight months to over two years (Maine Aquaculture). 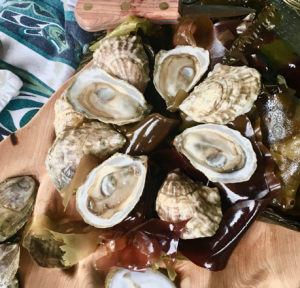 Starting in the 1970s, the Damariscotta River area was the pioneer of oyster aquaculture in Maine and to this day makes up a large portion of Maine’s harvest. In 2017, of the $7 million earned from oyster aquaculture, $5 million came from the Damariscotta River. The growth of oyster farming is also happening in Downeast Maine where now over fifty-five LPA’s are present in Hancock county. Leases in Downeast Maine are mostly located in Blue Hill and Frenchman Bay. Bays further Downeast that are less protected tend to be colder and this slows the growth of oysters, making it more difficult to raise a commercial crop in the 2-3 years that appears best for aquaculture success in Maine. The future of oyster aquaculture looks promising, as long as sustainable practices are used and market space remains available.