This account covers the origins of the marine worm fishery in Maine, as well as the biology of the two species targeted in the fishery: bloodworms and sandworms. For an account of the current fishery and its status, please refer to Fisheries Now: Marine Worms.

The origins of the fishery in Maine 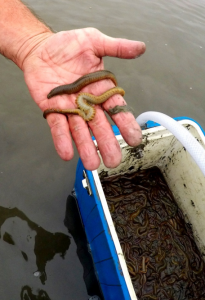 A sandworm in a digger’s hand. The cooler pictured below is used for storing sandworms during a tide.

The beginning of the New England marine worm fishery is not well documented, but it likely began in New York and Massachusetts prior to the 1920s. As worm populations in those states dwindled, bait shops and dealers began looking for new opportunities (Eldridge, 2010). According to leaders in the industry, a worm dealer from New York named Abe Wanser traveled up the coast to Maine to look for worms after a recommendation from a Maine clam digger. He harvested a small quantity of worms from mudflats around Wiscasset and took them back to New York, where they sold quickly as live bait for saltwater sport fisheries including flounder, saltwater bass, porgy, and dollar fish (Eldridge, 2010). Returning to Maine in the late 20s or early 30s, Wanser set up a worm shop in Wiscasset, from which he began buying bloodworms (Glycera dibranchiata) and sandworms (Alitta virens) from diggers to sell to the markets in New York. The fishery grew slowly in Maine, expanding in the Wiscasset area and slowly moving further up the coast as new dealers opened their own shops.

By the 1940s, the market for marine baitworms had expanded from Connecticut to Virginia (Flye, 1941). The Sheepscott River in the Wiscasset area was still a central harvesting location with 2,500,000 worms harvested from Maine’s flats each year. At this time, the industry was only selling to an East Coast market and was restricted by the months that sport fishermen were interested in fishing at sea, from about March to December. During this season, a good harvester could make up to $100 per week (Flye, 1941). Worming finally reached the eastern-most portion of the state in the 1950s, allowing fishermen along the entire coastline to participate in this fishery.

In the early days of the fishery, worm harvesters—also known as diggers or wormers—used steel buckets and handmade worm hoes that were fashioned by recycling steel from other products such as baby carriages, springs, and dung forks. Many diggers began harvesting worms as young children with theirs fathers or older brothers. Those that started in this way still express pride at being able to help their families by paying for their own school clothes and supplies.

Expansion of the Worm Industry

In the 1960s, Wiscasset was considered the worm digging capital of the world, with the major dealers clustered in this region and smaller shops spread out along the coast (Graham, 1966). By this time, Maine dealers had access to wholesalers in New York, Florida, and California, with these businesses distributing the worms to smaller bait shops for sale to sport fishermen. During this time, one shop in Addison paid diggers $22 per thousand for bloodworms and $16 per thousand for sandworms, and a good digger could earn around $200 per week in the summer months (Graham, 1966). From the beginning, bloodworms have been worth more because they stay on hooks better than sandworms, are easier to divide into pieces, and are a hardier species that can be shipped more easily to distant markets. 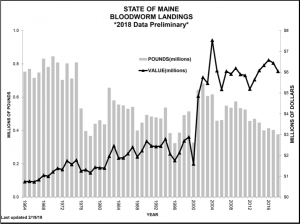 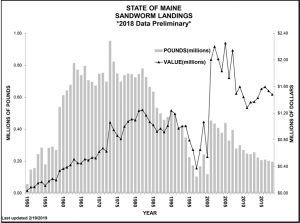 Ecology of Bloodworms and Sandworms

Bloodworms are segmented worms that are typically a combination of red, pink, and orange in color with a relatively smooth body other than small parapodia—leg-like projections—running down the sides of the body. Bloodworms are found from the Gulf of St. Lawrence to Florida and in the eastern Pacific in water as deep as 400 m (Brown, 1993; Wilson and Ruff, 1988). In Maine, they have been found on the ropes and trap runners of lobster gear and while excavating pilings during bridge construction. Most bloodworms are found in the top 15 cm of sediment, often in fine muds with high organic content (Sypitkowski et al., 2008; Wilson and Ruff, 1988), referred to by diggers as “mealy,” “gritty,” “sandy,” or “sawdusty” mud. 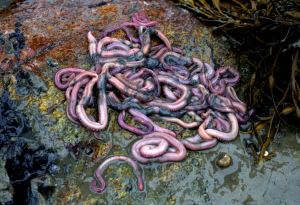 Bloodworms dug from a Maine mudflat. These worms were rinsed to remove the bulk of the mud and then spread out on a rock to allow for a closer photograph.

Bloodworms possess four hollow teeth on a proboscis that they can fling forward in pursuit of prey. Each tooth has a channel for secreting a neurotoxin which is particularly effective on crustaceans (Wilson and Ruff, 1988). They prey heavily on amphipods, isopods, and polychaetes, and sandworms must be kept in a separate container during digging to prevent bloodworm predation. However, their impressive teeth and neurotoxin does not prevent them from being preyed upon themselves. Black-bellied plovers use a foot-trembling behavior to bring bloodworms to the surface (Brown, 1993), and bloodworms have also been found in the guts of fish species, namely striped bass, which are known to root around in the mud at high tide (Wilson and Ruff, 1988).

In Maine, the spawning season for both bloodworms and sandworms runs from April to June, unlike populations in Massachusetts and Maryland which can spawn in August, January, and throughout the spring and summer (Creaser, 1973; Simpson, 1962a). Worms typically start spawning first on mudflats in southern Maine, around the end of April or beginning of May, while worms in the Midcoast and Downeast regions typically start to spawn around the end of May or beginning of June. During this period, both bloodworms and sandworms turn lime green or translucent—in contrast to the typical red to pink for bloodworms and orange to brown for sandworms—filling up with a milky white liquid that takes up the bulk of the posterior end of the worms (Brafield and Chapman, 1967).

In bloodworms, the digestive tract atrophies before reproduction in both sexes (Simpson, 1962a). During spawning, males and females swim up to the surface of the water and rupture, releasing sperm and up to 10,000,000 eggs per female (Brown, 1993; Simpson, 1962a). Brown (1993) records both sexes dying directly after spawning and Klawe and Dickie (1957) reference the appearance of these dead “ghost worms” on flats. Early development of bloodworm larvae occurs at the sediment surface and is likely followed by swimming stages and planktotrophic larvae; however, later stage larvae have neither been found in plankton tows nor raised in the lab successfully (Brown, 1993).

Sandworms are also segmented worms that can range from blue to orange to brown with numerous large parapodia—much larger than bloodworms—running down the sides of their bodies. Sandworms are found in the northern Pacific and Atlantic oceans in water as deep as 150 m (Brown 1993). They can burrow to 45 cm and are found at higher densities in the low intertidal than the high intertidal (Ambrose, 1986; Brown, 1993; Wilson and Ruff, 1988). Diggers report that they are typically found in softer mud, both deeper and further out than bloodworms. Sandworms can tolerate salinities as low as 0.5 ppt and have a thermal optimum between 11°C and 20°C (Wilson and Ruff, 1988).

Sandworms have two jaws and a large proboscis (Brown, 1993). As omnivorous scavengers, they can detect food odors and will extend up to two-thirds of their bodies outside of their burrows to feed (Brown, 1993; Pettibone, 1963). Sandworms are known to feed on seaweeds, amphipods and other small crustaceans, polychaetes, and bivalves (Wilson and Ruff, 1988). Gulls prey heavily on sandworms and preferentially select larger worms (Ambrose, 1986). Gulls will often follow diggers around on the mud, picking out some of the worms that they have left in their diggings because they are too small to sell for sportfishing bait. Common eiders also feed heavily on sandworms in the summer (Wilson and Ruff, 1988).

During spawning, male sandworms swarm in the water column, but females do not swim (Brown, 1993). Each female releases between 500,000 and 1,300,000 eggs which are extruded onto the surface of the mud (Brown, 1993; Wilson and Ruff, 1988). After spawning, males frequently wash up on the shore with the posterior region absent or emaciated; some, however, are found still trying to burrow (Brafield and Chapman, 1967). Development of the larvae likely occurs primarily at the surface of the sediment (Brown, 1993) after a very short planktonic stage—only 12 to 15 hours in a lab setting (Bass and Brafield, 1972). About two weeks after fertilization, larvae begin feeding at the sediment surface subtidally, not emerging in the intertidal until three months of development (Bass and Brafield, 1972).

For an account of the current fishery and its status, please refer to Fisheries Now: Marine Worms.

Brafield, A. E., and G. Chapman. 1967. Gametogenesis and breeding in a natural population of Nereis virens. Journal of the Marine Biological Association of the United Kingdom 47(3):619–627.

Klawe, W. L., and L. M. Dickie. 1957. Biology of the bloodworm, Glycera dibranchiata Ehlers, and its relation to the bloodworm fishery of the Maritime Provinces. Journal of the Fisheries Research Board of Canada 115:1–37.