Each spring, alewives (river herring) return from the sea to reproduce in freshwater lakes. At one time, the annual arrival of these fish provided an important food source for early New Englanders because they kept well when smoked or salted.  Today. Many river herring runs have disappeared due to overfishing, pollution, and dams and other barriers to fish passage. In the Mill Pond watershed in Somesville, several dams constructed in the late 1700s to power saw, grist, and woolen mills blocked the alewife migration. Runs did not entirely disappear, because some adult fish were usually caught below and released above the dams by citizens interested in preserving an alewife run.  Fishways were eventually installed in these dams to allow the alewives to continue in their natural migration, but in recent times those fishways had fallen into disrepair and alewife runs nearly disappeared.  Starting in 2005, fishway restoration has enabled the return of this sea-run fish to Somesville. Watch the schools make their way through the historic fishways between early May and early June. Park at the Historical Society Museum, where an interpretive sign adjacent to the Mill Pond explains how it all works. 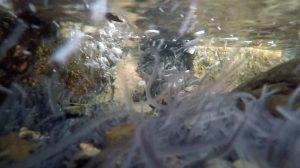 Alewives and Elvers in Somesville: is a short educational video created in Spring 2019 by a College of the Atlantic student,Annaleena Vaher, as a final Project for her Fisheries, Fishermen, and Fishing Communities class. The video explores how alewives and elvers migrate from Somes Harbor to Mill Pond, to eventually reach Somes or Long Pond. It looks into how the Somes dam affects the run both on land and underwater. The video also focuses on monitoring work that the Somes-Meynell Sanctuary conducts in order to restore the population of sea-run alewives. It is born out of curiosity and deep respect towards both species.

Alewife Runs at Somesville, Maine.  KnowledgeBase (Science and information management for the Gulf of Maine and its watershed)