Imagine you and your family are visiting Maine for the first time. Everybody is excited to taste the local food, but you are especially craving the quintessential Maine delicacy. You go to a seaside shack and are given a bright red bib that says “Let’s Get Crackin!’’ You are salivating while your server comes and sets down a small, oval tin. With a crack of the tin, you reveal six sardines nestled inside with a glob of mustard acting as a blanket. “I have never tasted sardines this good!” you exclaim while you are chowing down as fast as you can. While this story appears farfetched, it is not too unrealistic. At one time sardines, (yes, the briney canned fish) were more popular than lobster. But slowly, lobsters started consuming sardines… 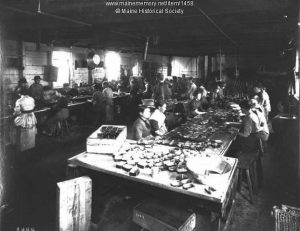 When it comes to canned fish, there is no species named “sardine,” rather it is a name given to any small herring that is eaten, while larger individuals or species are often called pilchards. In Maine, the sardines that were packed were Atlantic herring, Clupea harengus, which were incredibly popular. Not only did they provide a great meal for poor immigrant families, they also were a treat served on pristine plates with little forks for the upper class––in 1935, Oscar Wilde’s son, Vyvyan Holland, founded a sardine tasting club in London. The U.S. blew through 3.8 million cases per year; they were packed in lunch boxes, and they were eaten in homes, restaurants, and bars––before Prohibition, bartenders had tins of them sitting out instead of popcorn or nuts. Despite all of the consumers having different backgrounds, they were all consuming Maine’s top fish, for 98.8% of all sardines in the U.S. at one time came from Maine.

Lobsters, on the other hand, were not popular. In early U.S. settlements, because of the crustacean’s appearance and abundance in New England, lobster was seen as food for the impoverished, servants, or prisoners. In fact, one group of indentured servants in Massachusetts who were fed up with their lobster-filled diet took their masters to court and won a judgement that prevented them from being served lobster more than three times a week. Mid-19th century author John J. Rowan summarized the perception of lobster best: “lobster shells about a house are looked upon as signs of poverty and degradation.”

Lobsters and sardines converged for a brief number of years when canneries began processing lobster and selling the meat in one pound cans. By 1870, 1,200 lobstermen supplied enough stock for 23 canneries to produce two million cans of meat per year. This ultimately resulted in overfishing.

Overfishing coincided with the first real wave of wealthy vacationers visiting Maine. As such, lobsters were eaten by tourists who did not have the same negative connotations as the locals. In Maine, travelers believed lobster was an exotic delicacy feasted on by the Rockefellers. When the lobster-filled tourists returned home, they craved the red shellfish, so smacks, or small boats with holes drilled into the hull that allows water to circulate through tanks, became popular to transport lobsters over long distances. This allowed people in cities like Boston and New York to satisfy their craving. But lobster’s consumer demand really seized when the Great Depression inhibited most family’s ability to travel and eat expensive, imported foods.

In Maine, though, lobster’s poor reputation had continued. During the Great Depression, people who were struggling financially would wait until dark to tend to their lobster traps in order to avoid anybody seeing them. Most would eat the crustacean in private, and would not send their children to school with sandwiches made of the “poor person’s meat.”

When sardines and lobster were sent overseas to U.S. soldiers in World War II, on the homefront, one of the only proteins that was not rationed was lobster. This provided an opportunity for more people than ever to enjoy lobster. Lobster increased in popularity throughout the years while the sardine industry reached its peak in the early 1950s and faded into oblivion until the last sardine cannery in Maine (and in the nation) closed in 2010.

Now, lobster is king in Maine. Nothing is more marketable than a cute caricature of a bright red lobster: it is on a state license plate, there is a minor league baseball team based in Portland named after the crustacean, it is Maine. Lobster consumed the sardine’s market space. But it also consumed herring in other ways. 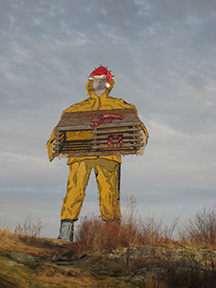 When the Stinson Sardine factory closed, and was eventually transformed into a lobster processing plant, the iconic Sardine Man, a two story statue, started carrying a lobster trap rather than a sardine can.

As human consumers moved to a higher price fish, so did the fishermen. Lobster accounts for 76% of Maine’s 2018 landing value while herring makes up only 3%. Both on land and in sea, lobsters have taken over the real estate of herring. In many cases, the only trace left of the sardine industry is the factory that processed them. But old canneries are being converted into lobster processing facilities, such as the one in Prospect Harbor, the last sardine cannery in the U.S. Lobsters have consumed the bones of the dead herring industry. But they have also taken over the wild ocean. Because of effective lobster conservation measures, the decline of groundfish (lobster’s primary predator), and warming water temperatures, lobster populations in the Gulf of Maine have increased by 515%. Herring stock, on the other hand, has only decreased. Lobsters have consumed Maine’s land and waters.

But herring is literally being consumed by lobsters, too. Herring’s primary use is now no longer as sardines, but as lobster bait. Canneries began capitalizing on the expanding lobster demand by supplying bait, and this kept them afloat. In 1997, the Sardine Industry Association’s executive director, Jeff Kaelin, testified to Congress that 40% of Maine sardine canneries’ herring was sold before processing, as lobster bait. Now, Maine is facing an impending bait crisis because of low herring stock. What will be the result? Will another fish be able to take its place as the quintessential seafood of Maine?

As we look into the future of this crisis, it is important to remember Maine’s beginnings and the two different paths that our two seafood friends took that made them fall in and out of consumers’ favor.

Luzer, Daniel. “How Lobster Got Fancy: The Surprising History of a Delicacy.” Pacific Standard, 14 June 2017, psmag.com/economics/how-lobster-got-fancy-59440.

“When Sardines Were Bigger Than Lobsters, Maine Women Had Good Jobs.” New England