EAST MACHIAS — Today, I’m paying a visit to the Downeast Salmon Federation’s (DSF) Peter Grey Hatchery with 16 of my fellow students from College of the Atlantic (COA), along with our professors, Dr. Chris Petersen and Natalie Springuel, and our intrepid teaching assistant Katie Clark. For us, this is one stop out of many on a three-day journey around coastal Hancock and Washington County to meet with various experts in the world of fisheries and to experience the fishing culture of Downeast Maine first-hand for the course Fisheries, Fisherman and Fishing Communities. 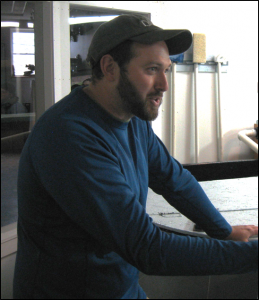 We are greeted at the door by Brett Ciccotelli, a fisheries biologist for the DSF and a COA alum (class of 2009). He’s our tour guide for today. After a brief introduction, Ciccotelli leads us through a glass door into a room filled with the sound of quietly whirring pumps and running water. This is the hatching area of the hatchery. Tall varnished wooden boxes sprouting white PVC pipes pour constant streams of water into large, deep plastic pools half covered by white wooden boards. It’s hard to see at first, but as our eyes adjust we can make out hundreds of tiny fish, only about an inch long, sitting on a white disk at the center and bottom of the tank. The water, like the East Machias River outside, is not clear but a dark brown, stained with tannins from leaf litter.

This is not the first hatchery I’ve visited. Back home in New York, I toured a state-run Department of Environmental Conservation (DEC) hatchery in the Adirondacks while attending an environmental science summer camp. Huge industrial pools of ravenous trout meant for stocking fishing ponds surrounded the concrete bunker of a building, while inside the complex, massive square tanks, pipes, and sluices circulated baby salmon around the room, stark against the sterile white tanks. They seemed stressed, jumping and fleeing every time I moved. It was noisy; the air tasted metallic and smelled strongly of fish and fishmeal pellets. Luckless individuals that hadn’t survived the early stages of life could be spotted floating, dead-eyed, in many of the pools. While fascinating to me at the time, in hindsight it was a grim place. 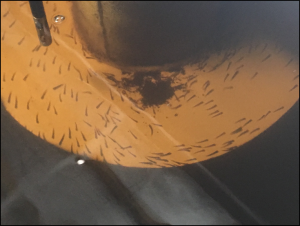 Hundreds of salmon fry swim in one of the distinctive black holding tanks that characterize the Peter Grey Hatchery. (Photo Credit: Emma Ober)

This contrasts in almost every way with the room we’re now in. It’s smaller, the tanks are round and solid black instead of white, the noise minimal and arguably pleasant. There are no dead fish in sight, and the only smell that of river water. Ciccotelli explains that these differences are what set DSF hatcheries apart from typical hatcheries. Instead of a setup that resembles a clinical research institution, the Peter Grey method attempts to replicate the conditions of a salmon’s home river. The black tanks and covers keep the water dark, and the water itself is piped directly from the river outside and maintained at the river’s current cool temperatures. The wooden boxes are formally known as Kielder substrate incubation boxes. Dr. Petersen, standing next to one of the boxes, holds up a piece of plastic for us to see. It’s a U-shaped contraption resembling a cross between a pasta bowtie and a dental retainer. When a bunch of them are poured into the boxes, they fill space in an irregular manner, creating gaps where newly hatched salmons, or alevins, still attached to their yolk sacs, can hide. This setup, bathed in waters of the East Machias, replicates the gravel nests, or redds, where female salmon lay their eggs. Once they are strong enough, the alevins swim up the PVC pipes and are swept into the holding pools. Their yolk sacs are gone by this point, and the small are referred to as fry.

Most hatcheries release the fish at this point, but Ciccotelli explains that the DSF wants to make sure these fish have the greatest chance possible at surviving in the wild. The fish are thus kept until they reach the stage known as parr, when they are several inches long. This requires more tanks to avoid overcrowding as the fish get bigger, and gradually increased flow rates in the pools to build up the strong swimming muscles a salmon needs to fight strong river currents, plow through riffles, and leap up waterfalls. It’s a high-maintenance operation, which demands constant monitoring of water quality, temperature, oxygen levels, food, and fish health. The staff members responsible for the monitoring and regulation during this time “basically never sleep” Ciccotelli jokes. Once the fish are around 9 months old and the water begins to cool with the arrival of fall, the parr are ready to be released. Before they are set free, every Peter Gray Parr is marked by trimming down their adipose fin, so they can be identified during re-capture checks. Then it’s off into the rivers, where the fish will grow into smolt over the course of 1-3 years, swim down the rivers, and finally head out to sea and to their destiny.

Ciccotelli leads us out, walking us through a room filled with empty tanks, awaiting young parr that have yet to grow. We exit through a back door and look out over the East Machias river, flowing fast, wide, and shallow. Our guide tells us that so far, the project has been very successful. The center is nearing a grand total of half a million fish released since 2012, and the density of juvenile salmon in the river has nearly tripled. 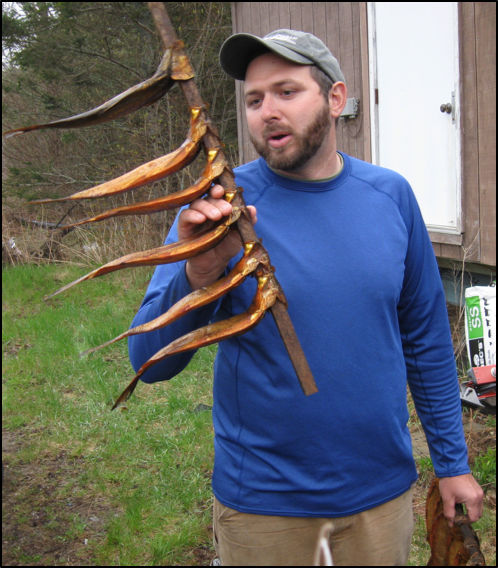 After we finish looking at the young salmon, we walk to a tiny building close to the hatchery. It’s a smokehouse for making “bloaters,” traditionally smoked alewives with the guts still inside. It’s a tradition that dates back hundreds of years in Maine, and used to be a major industry on the coast. The DSF also owns a mobile smokehouse, which Ciccotelli, DSF’s “Alewife Ambassador,” brings to schools to teach students about the history of the fishery and the role of alewives in riverine and marine ecosystems. One of our group climbs a ladder and hands down sticks with alewives speared, or “strung” through the gills and mouth. Just like salmon, alewives have declined in past decades due to damming of most of Maine’s rivers, cutting off the sea-run fish from their freshwater spawning grounds upstream. Because salmon have declined to a point that they aren’t a viable commercial fishery, they can be a hard sell when convincing towns to invest in conservation efforts on the fishes’ behalf. Alewives, on the other hand, while no longer an important food source, are still a valuable fishery used for lobster and halibut bait and communities are far more eager to conserve. By working to restore connectivity in Maine’s rivers and streams for alewives through river restoration and run monitoring programs, DSF is also helping Atlantic salmon.

Ciccotelli paints a picture for us of how the fishes’ population has changed in this area. “Picture this river, let’s say it has 700 thousand adult alewives running in it over the next 4-5 weeks. Those fish go and spawn, lay their eggs in the lakes. There’s estimates that a female might have between 70 and 100 thousand eggs inside of her. [Even] if you knock off huge loss margins, you’re still talking tens to hundreds of millions of juveniles going out to sea out of a river like this… if we picture Maine before connectivity was cut off by dam building and all kinds of different habitat loss, the St. Croix, for example, had, say the number was ten million fish… now we’re at a point in our history where the entire state only equals that one river.”

Management of the alewife fishery is both state and local; Ciccotelli explains that after major crashes in the 1900’s, many towns that harvested Alewives abandoned the fishery and lost their rights to it, leaving management to the state. Just over 20 towns, including East Machias, maintained their rights, and now manage the fishery themselves. As populations rebound from zeros to millions thanks to river restoration work that groups like DSF have undertaken, there’s a question as to whether harvesting rights and management should be allocated to more towns as more fish become available. “Alewives are cool because they’re rebounding, but we need to make sure we don’t then focus all our our attention on the alewives, then we knock them out again. If we lose Atlantic herring only to replace that with an over-aggressive harvest on alewives, we have to be mindful of that kind of trap.” As though on cue, an osprey calls above our heads, highlighting another reason why these fish matter: they’re a critical prey species. “Ecologically, they’re an important piece of food for everything out there… feeding everything along the river, every fish down in the bay. They’re integral here.”

It’s time for us to go. As we drive off to our next destination, a bag of generously gifted bloaters stashed away in the cooler behind my seat, I look back over the roiling brown river. In those waters I imagine the adult alewives, scales shimmering silver and blue-green in the afternoon light, battling the currents on an incredibly difficult journey that, at its close, will mark the ends of their lives, and the beginnings of countless new ones. Meanwhile, in the black pools of the Peter Gray Hatchery, tiny salmon fry swim in gentle circles, each a very tiny part of a very large, ever changing ecological landscape.